2147 tests for the Wuhan Flu have been administered in the Philippines as of right now according to the Philippine gov dept health website.

Politicians got a lot of the tests.

We have no clue about the real numbers.

We do know that hospitals are full and turning away sick here.

Then some idiot goes out crowing about how cases have dropped to the press.


Many more politicians here have got it now.  All elderly.

Senator Koko Pimentel tested positive on the 16ht of March, proceedd to run all over town, including the supermarket, and hours spent in the hospital while his also infected wife gave birth.

Now the hospital is shut down.  Senator also contaminated his condo high rise.  The other owners are wanting to forceful evict him now.  Because he is a connected guy, no charges filed.

A picture of the son of Ferdinand Marcos med papers circulating online.  Supposed test negative but cat scan shows he has it.  Chinese rapid test was wrong I guess.  He is a senator also and ally of Duterte.  Dutertes inner circle has all been exposed.

Looks like overnight for me here was the biggest gain in cases yet.  passed thru the 500k mark and at 525k.  It was around 477k when I went to bed.  The power of exponential growth.

Still seeing the "just the flu bro" posts.  People trying to convince others of this are either stupid or evil at thispoint. 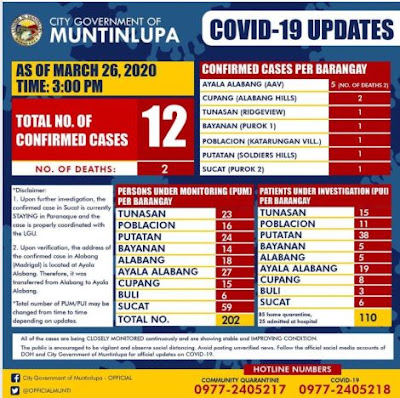 Due to a lack of testing available the true case counts here are low.  This is just the count for one city in the metro area.  Population 500k.

I am not confident in the success of this quarantine.  It buys time, but then people run out of food anyways.  Come out, get sick, game over.  The daily photos of the masses of shitheads out in the streets at the markets, shows the breeding ground for this.

India went on lockdown too.  Odds their slums are on fire with this as much as here if not more.  Filipinos bathe a lot, in the ot season, 2-3x a day.  I personally shower 3x a day when working outside in the heat. Indians do not.

The gardeners came around and sprayed everyone's cars and gates with disinfectant.  Kind of a wasted effort IMO.  The sun is hot, and bright, doubt anything left on the gates and  outside of the cars.  But hey if it makes you feel better...

Checking flightaware, only 2 flights in the air that have landed or departed here.  One inbound from Hong Kong and one outbound to Malaysia.

It is extremely quiet out there.  Only sound is the damn roosters the neighbor outside the subdivision has.  200 yards away and can still hear them plan as anything.