MOARGUNS!!!!!!!
After a TON of trial and error FOSSCAD has achieved 3DPrinted firearms in Polyether ether ketone (PEEK), by Jeffrod (@BigTanGringo). PEEK is a very strong organic thermoplastic polymer that is traditionally impossible to print using the average REPRAP style printer due to the high temperatures required to extrude it and the speed at which it cools. FOSSCAD was able to print PEEK using the GARCAD Model I printer, a very high quality FDM printer. For more on this printer visit https://garcad.com 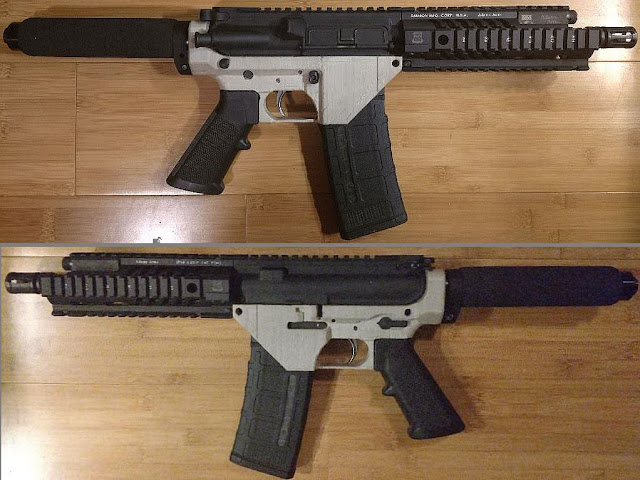 Top vents
HERE IT IS! A 3DPrinted PEEK AR-15 Hand Guard, by Jeffrod (@BigTanGringo). This hand guard was created in few hours in hopes to reduce weight. The result is 0.51 lbs (230g) lighter. The hand guard was printed on a GARCAD Model 1 3D-Printer. You cannot print PEEK on a run of the mill Prusa. For more information visit: https://garcad.com 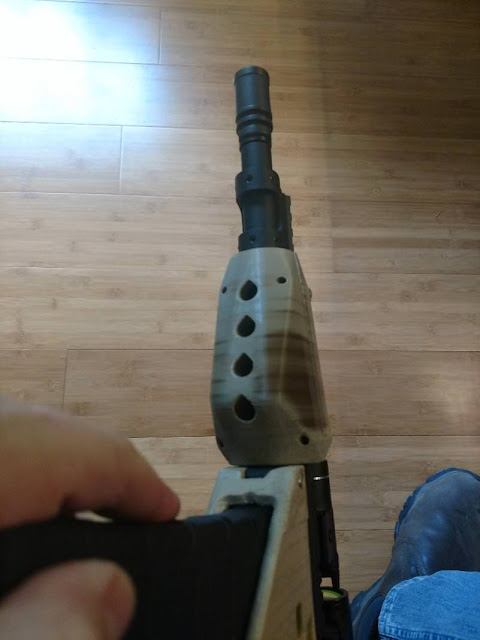 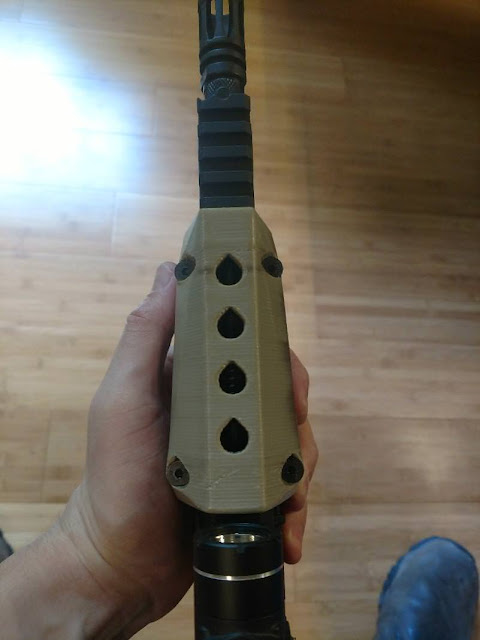 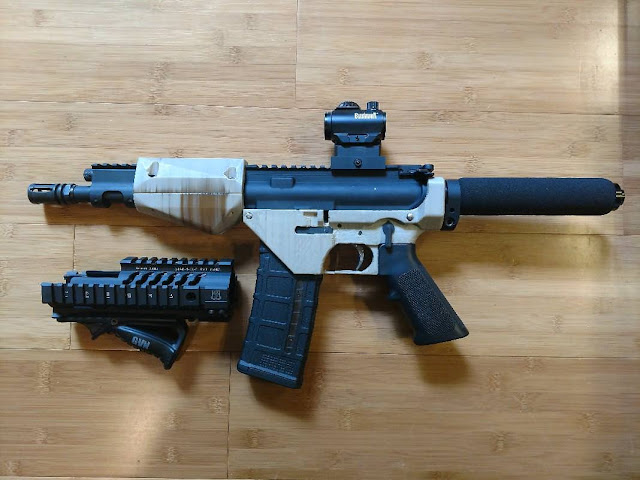 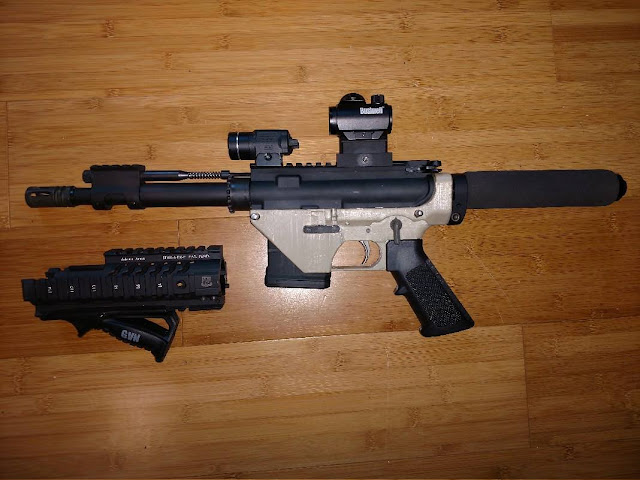 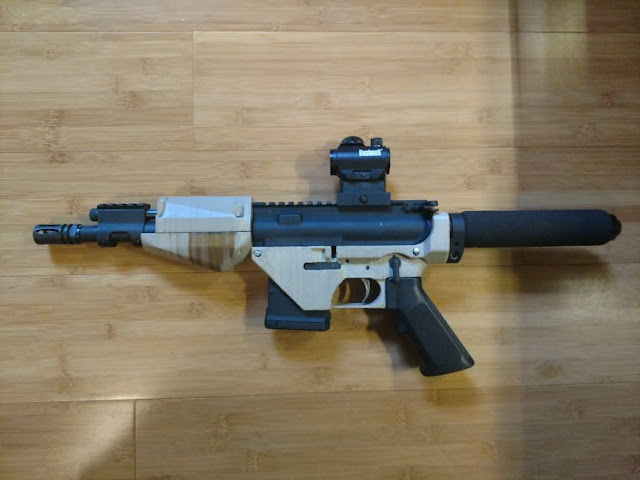 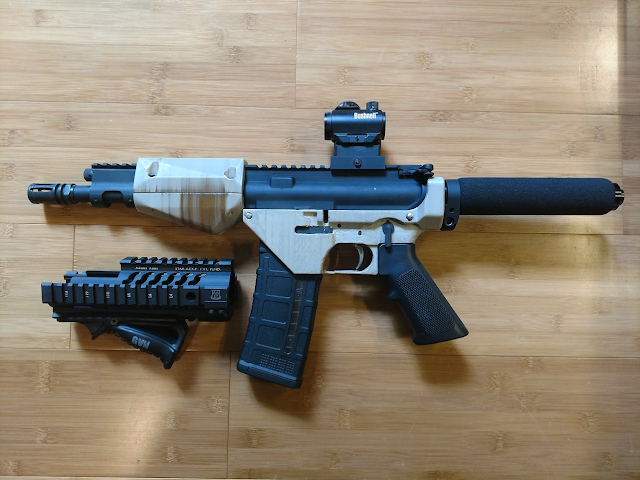 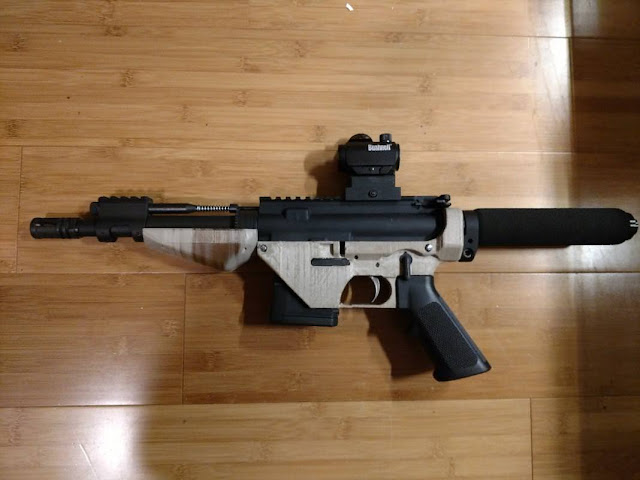 It was some school teacher doing something called micro blasting.  Itis a very tiny charge in a big rock to break it up for mining.

I found the video interesting from a scholarly standpoint, so using the google-fu, I looked up the manufacturer site for it.

Seemed interesting.  It is exempt from AFT registration also.  the devise is called the micro-blaster.

Basically you shoot a small hole in the rock (although tree stump could work too?)  blow out the dust, insert the tiny charge, then some long device with a pole and attached with what appeared to be a hose or cable inside a hose.

So along with the search results came up a video from a plumbing guy.

He doesnt use the couple thousand dollar setup.  rather it is much more simple and you can DIY it.

You just use a rifle shell.

Now from viewing Taofledermaus youtube, he demonstrated that you can put pointed bullet shells together to get a chain reaction.  However if you see the results from just one shell, you will be impressed.

I imagine you could rig up a spring loaded device to do the same as the guy with his post driver without having to stand on top of the rock without a lot of extra work.

Seems like a fast way to blow stumps, and remove big pieces of concrete.

What I Been Up To

Well the last couple months have been trying.

The latest extrusion machine and plastic shredder went out finally.  Way overdue cuz had a lot of supplier issues.

I finally got those worked out this month.

So far the machine count has been a shredder, extrusion machine, injection molding machine, a couple shredder parts kits, and a CNC plasma table out the door.

The other CNC plasma project I have been collaborating with a buddy on is finally working.  He bought a big Chinese 5x10 plasma cutter from China with a US made Powermax85 torch, US made air compressor, and air dryer.

The factory my buddy runs is in the same shop space I used a few years ago. He was expanding and needed the space.  We also had limited power supply and was always competing to draw power from the same 60 amp 220v meter.

The building is blacklisted by the power company for some previous residents overdue bill from 20 years ago or more.  So the power company will absolutely not install upgraded service without paying someone a under the table bribe of around 10kUSD, and buying a transformer.

Doing the math on the power costs here, ( more than double that of the US) and the extra commercial rates + monthly service charge for three phase + cost of transformer, it was cheaper to buy some big gensets and fill with diesel from the gas station across the street.

However that too brought in its own adventures.

Instead of one big generator, there are two 50kva gensets in the shop.  However the second genset was set up on delivery to cut off at 125% of capacity not the 75% of capacity that is recommended.

My buddy didnt know it was set up wrong.  So he is running 7 welders, a couple lathes, a air compressor, and a few other tools on it along with the CNC plasma thinking 'Wow we finally have a lot of power', only to burn out the generator.

The seller whose service tech misconfigured the machine will not take responsibility for it and insists on charging around 2000 bucks for the repairs which include a rewinding.

Needless to say a different service tech was called to do the job for 1500 bucks and the first one was told, he will get no more business.  Being that hiring a lawyer over it will cost more than the repairs and all.  However word will get out.

My second CNC plasma has been a adventure as well.  I had it all running except for the torch eight control.  I contacted a company that I had bought from previously and was told that they didnt want to sell anymore.  So I ended up buying from a Russian guy instead.  The Russian guys service was way better than the previous guy.  The catch was that I had to swap out the control board for a old school parallel board.  No biggie, $38 bucks to Ali Express and a new one showed up on the doorstep the same day as the torch height arrived from Russia.

Installation went off without a hitch.

Except the cheap china plasma torch now will not work.  Not sure, it was a crap machine to begin with, and now just makes sparks.

So another $700 for a better plasma torch with a machine torch coming from China.

The injection molder was a surprise order.  Guy messages me asking about one and then shows up at my door a few days later.  I had a project out of town scheduled but so it was kind of a low priority project, but since the out of town job canceled due to weather, I finished it in record time.

The injection molder was a bit of a learning experience.  Next time I will use higher quality hydraulic shafting and up the price 200 bucks.

It is in the middle of rainy season here now.  the scorching heat has mostly broke but its cloudy a lot and rains every day.  Next good weather will be end of September or beginning of October.

In other news... only a month and 11 day until Christmas season here.  (Starts September 1)