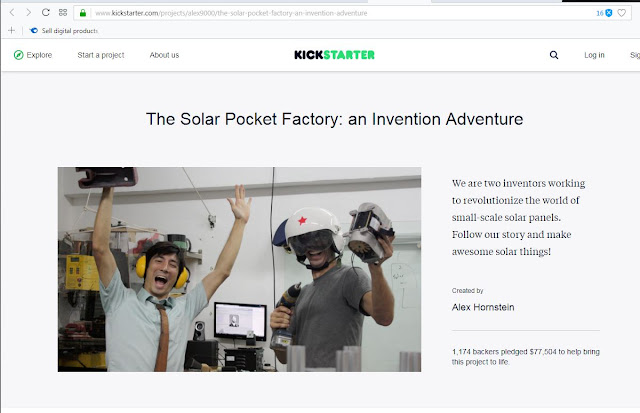 A few years ago there was this big thing about the Solar Pocket Factory in the tech press.

They two guys set up a lab in the Philippines and Hong Kong.

He delivered on the backing promises, but not much else was accomplished.  He was trying to build a pick and place machine to automate the small solar panel production.

Along the way he came up with a idea of using super-glue and some other stuff to make panels.  It was published on his blog.

At the end of the project he tried to sell the machine for all of one week, then closed up shop, disposed of everything and left.

I ended up with the remains of the lab, including his scored cells, computer, test equipment, shop vac, basically everything except his laser, which I later acquired a year ago and re-sold

I tried his published ideas from his blog with the very same materials he used.  Far from being the magical solution, I had a very high failure rate.  His idea involves super glue, tape and other things.

So a little background.

Over the last several weeks, I have been studying how to metal plate a 3D printed object.  So I am looking up conductive glue recipes, and trying various things to make the surface conductive to metal plate it without buying the expensive plating paint.

So then a guy I know messages me and asks about buying the several thousand remaining solar cells from the project.  It then hit me.

Why not use conductive glue to make the panel?

If you have ever looked up the youtube videos on how to make a solar panel, it involves soldering, tabbing wire and a lot of painstaking work.


So I google the term, conductive glue solar panel, and the only real video on the subject was Dan Rojas over at GreenPowerScience.

So check out the video.

then check out this link to how to make conductive glue

Now think about, how solar cells are made.  You probably do not know that all solar panels are soldered and hand assembled.  This is why the factories for this are in the Philippines and China.

However now you can automate the production using pick and place.  Think about how much cheaper a solar panel can be made and that one does not need to set up in the Philippines to make it profitable.

A few weeks ago, I was approached by someone in the USA about setting up a production facility in Asia for making micarta b

I then machined a mold on the CNC, and made a bunch of blanks.

I used a bunch of my really worn out khaki work clothes I wore in Iraq.

The deal ended up falling thru even though I had a great price ($2.50 a set of knife blanks) rather the guy didnt want to take the risk of buying a couple thousand dollars of micarta and doing the Amazon thing.

Anyways It came to me, that a very unique micarta could be made from used US military uniforms.

A premium for stuff actually worn in theater.
No comments: Links to this post