People will be looking back at the bears between 2010 and 2015 as the beginning of the 3D printing age and they will be mining the old forum posts and thingiverse designs for decades to come.

Here is a design released in 2015.  I am surprised that I missed it.  It is a small printer designed ot be made on a CNC router with only a couple minor printed parts (or it can also be wholly printed)

It is called the Trint printer and made by some guy in Estonia.

I can only find one online video of the thing on youtube.
Here is the Thingiverse link to the Trint Printer 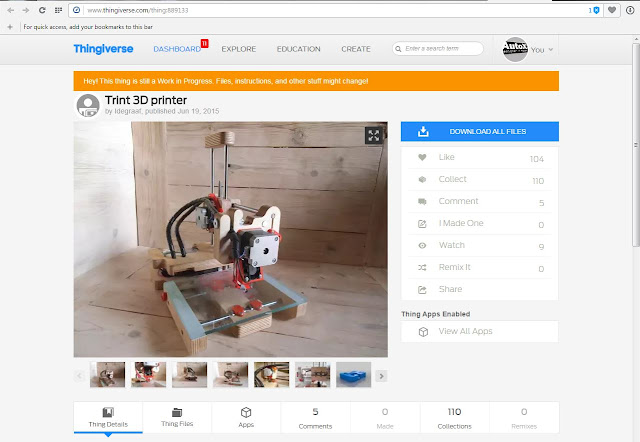 Here are photos of the various parts. 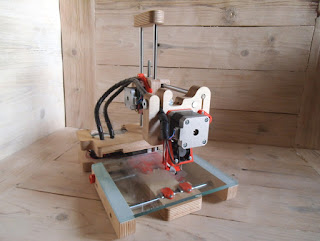 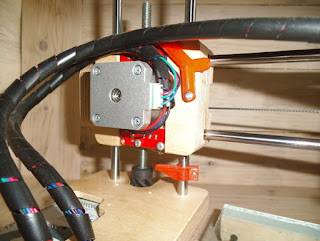 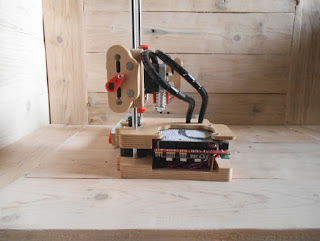 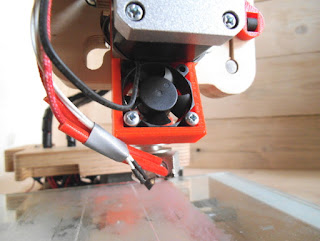 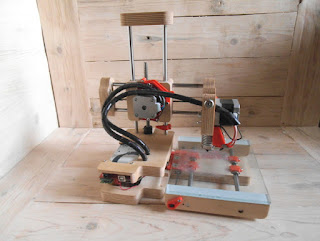 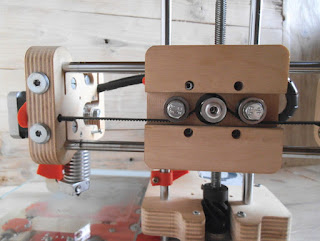 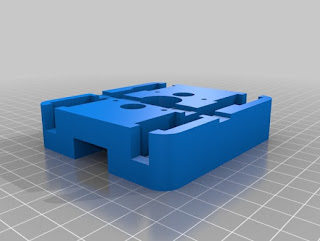 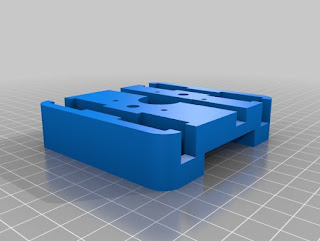 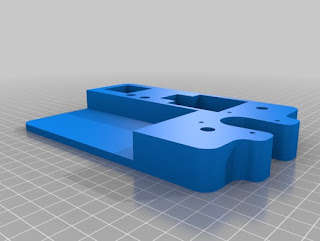 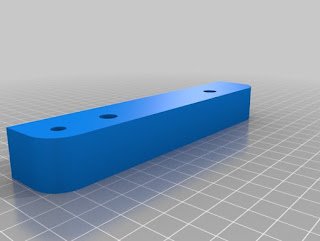 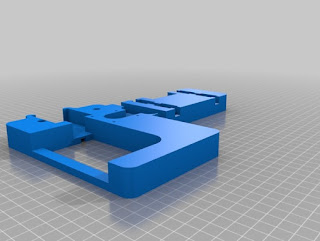 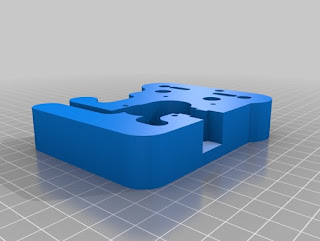 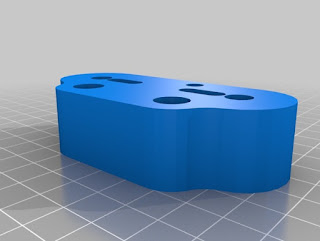 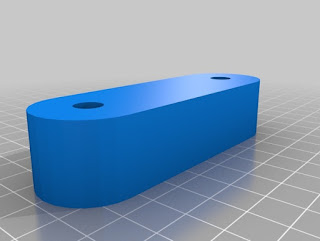 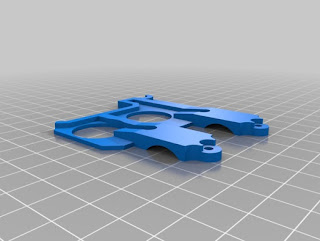 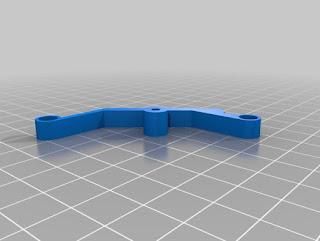 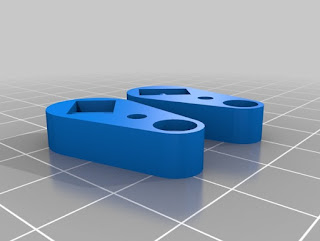 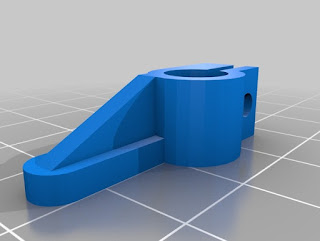 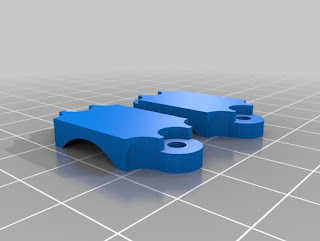 I have been struggling with dust control for my CNC mills ever since my first plywood framed thread rod drive iteration.

I have cobbled together dust shoes that only catch half of the dust as they had no skirt on them.

Yesterday I finally started building a cabinet from 2x3 board and 3/4 inch phenolic plywood. Reasoning the phenolic was only 4 bucks more than marine grade and no need to paint. 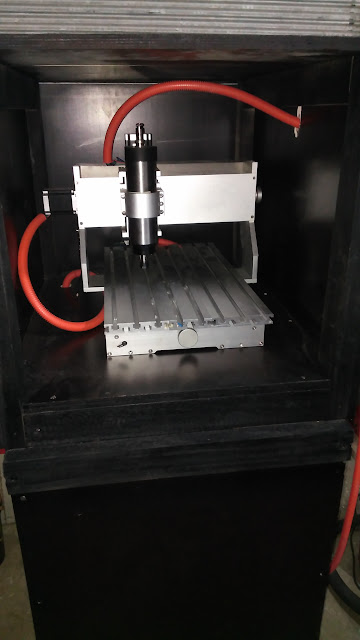 My new 1.5kw spindle arrived from China a mere 4 days after I ordered it on Ali Express.

In the shipping pipeline is a real dust shoe, 425oz stepper motors, bigger drivers and control board.

I started with the 4 axis tb6550 board. It worked good until I accidentally shorted two stepper motor wires. It works, but loses position sometimes. I switched to a Sainsmart USB board and drivers as a stopgap measure, as I am borrowing that board until some adapter plates can be machined for the CNC plasma table and the ball screw conversion done.

Meanwhile the tb6600 board is in transit. Actually I bought 3 of them from 3 different suppliers just in case. I also got another tb6550 3 axis board sitting in registered mail. As I have started building more routers, I need to keep more spares in stock.

I am also upgrading to 425oz steppers from the 250oz motors (approximate power). I need the power to plow thru wood at half inch deep passes with a half inch bit. My previous builds bogged down on this stuff using a one horse spindle and smaller steppers.

I also got a new 3d printer in the lab. I was commissioned to build one by a local guy here. He is, well you know the type. Asks a ton of questions over 6 months and doubt he will ever buy until, surprise! Here is money in hand. Needless to say, the guy is a cheapskate so I just bought a Chinese kit with a good review and put in together. It is a ultimaker clone with an extruded aluminum frame.

I had it assembled and running in about 8 hours. Despite no manual and never building this type of machine before. I only had a couple pictures to go off of.

Delivered it and the guy was initially happy. But then he started claiming mysterious problems. I took it back a few days later, and was unable to duplicate his problems. So I sent back and by 2am the next morning I get a inbox full of nasty messages. He originally asked about a 10 inch printer that I quoted more money for and settled on a smaller machine 220x220x280mm work area and then asked for a different style machine he could put a enclosure on. However he then claimed to have paid for said enclosure and a bigger machine.

I knew where this was heading, so I immediately offered full refund and return of the machine. I was not going to deal with guys like this as warranty games makes me lose money.

He brought it back about noon and brought a freaking POLICE ESCORT with him. The cop looked embarrassed and never said a word.

I checked over the machine and saw he was monkey wrenching the belts and pulleys a bit and were out of alignment, but nothing too serious. It still worked.

I hooked it up, ran a bunch of prints and posted pics and videos on Facebook. Complete operator error on his part. Meanwhile I got a new printer and I like it a lot so I'm going to machine upgrade parts for it including a nice enclosure. There are a bunch of printed parts that I want to upgrade to machined delrin or aluminum.

I also started designing a new variant of the MPCNC router. I have built a couple of them but the design of the Machine leaves a bit to be desired as it has a ton of parts. So instead of roller bearings, I'm going to use bushings and connect the drive shafts together physically instead of electrically. I'll also use the 256oz steppers I'm pulling off the aluminum frame mill and re-using them.

I also started building another 4x8 foot router table. Building on the lessons learned from my last build I charged a lot more to have a budget for better parts, and it's shipping fully assembled this time.

Regarding lasers, I have been fighting with a Chinese supplier. They pretty much hosed me with this thing and delayed delivery for 2 months. It arrived without the software security key, then that arrived and has bad power supply.

Meanwhile I'm looking like a idiot in front of my client, so I order another laser from my usual supplier not the joker that hosed me, which as it is now I'm losing a hundred bucks on the order until I can fix the first machine, sell it and get my money back.