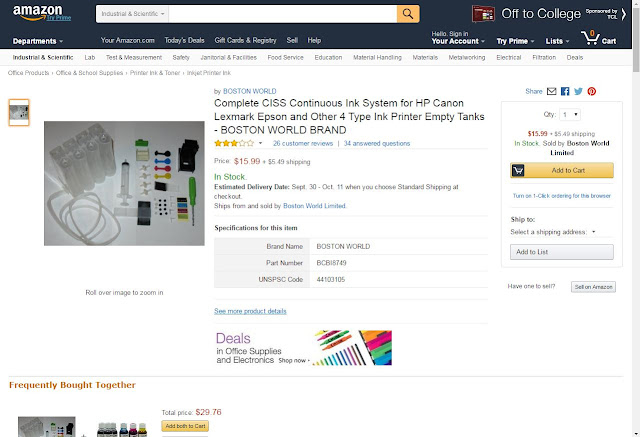 The WRSA article about home printing got me to remembering seeing this in Asia.

In Asia inkjet printers come already set up with this system and they are less than a hundred bucks.

I have seen entire print shops set up around a couple of these printers, a old used Xerox, and a couple used $100 core2 computers.

This one is $20 delivered.  Do you really have any excuse not to have one and not to flyer anymore?

Its dirt cheap.
Don't be lazy, get off your ass and do something about it.

The other side is.
Update:
Fabbersmith brought up the forensic dot bogeyman again.
Yes it is out there, however it depends on what you are printing and the level of deniability.
For example printing out memes, its not a criminal act yet.
For printing out night letters, then it is best to use more untraceable methods.  Used old black and white photocopy machine for example.
Other types of printing, for example, one could purchase a very cheap Chinese laser engraving machine.  These typically run about $500 USD in the US on eBay.
You prepare your document in photoshop or illustrator, export as .emf to LaserDRW.  Then you mirror engrave a flat rubber sheet like natural rubber gasket material.
After running thru the laser, you are left with a giant stamp pad.  You then wash the pad, gently with a bit of water, laundry soap, and scrub gently with a toothbrush.
The trick is to apply the pressure evenly with a flat surface.  Most likely you will have to get some steel plate and design a press, however, this type of design is relatively cheap and produces nice prints once you get your machine dialed in and technique down.
The alternatives to make small stamps like 2x3 inches and just hand stamp the old fashioned way.
There are certain technique for this that is a bit beyond the scope of this article however..
Suffice to say that even 2mm letters will come out clear if done right. 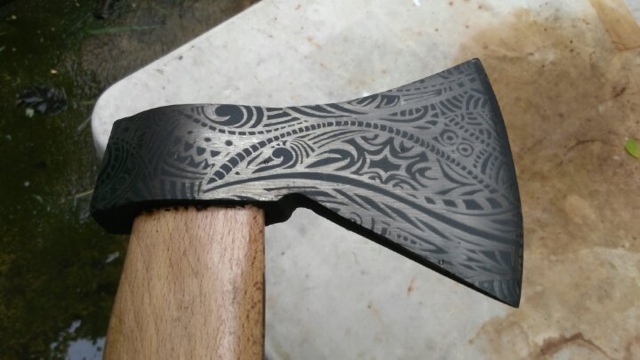 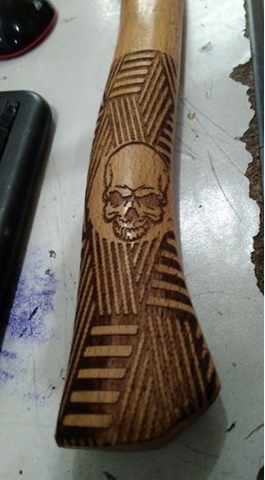 Making samples on the laser..
Anyone want one?
Honed to a razor sharp edge, and a thought durable coating, then engraved all over.
2 comments: Links to this post

Faceborg AI Is Farther Along Than You Think 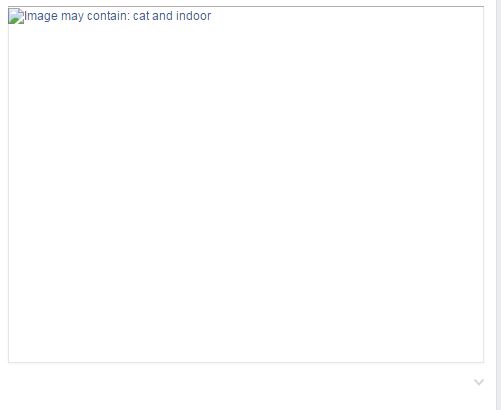 I first noticed the other day on a Matt Bracken meme when it said something about image contains man, text and outdoors.

I had a order for 2 CNC routers that included delivery and installation.  This later turned into 2 routers 2 lasers, and a 3D printer sale.

Due to having a lot of baggage and having a helper come along on the trip, I took the boat.

First stop was Cebu city.  Took the boat from Manila to Cebu.  There was a typhoon moving out of the area so there was a bit of a rough ride for the beginning of the trip as we exited Manila bay and turned south before getting to the more sheltered water off the coast of Batangas.

The ship was pretty large, and fast.  19 knot average speed.

Arriving in Cebu, I immediately was confronted with a bunch of scumbag porters.  Being new to the area, not really knowing the drill, I fended them off as best as I could.  Even still, a group of scumbags hopped into the truck we was using and demanded 100 pesos (2.50USD aprox) for using the street to load.  Bunch of mafia.

Clients factory was 2 and half hours away and since we arrived late at night, we ended up getting a hotel room near Ayala Mall in Cebu City.  Stayed at a very nice place, that was about $40 a night.  In the US It would have easily been $150 or more.  Excellent room, and breakfast the next morning was world class.

Next day we proceeded to the factory.  It was not far, but the traffic was pretty heavy on the two lane road, and going up the mountains, while being of paved cement, was very twisty with switchbacks.

We spent a few days putting the CNC router back together, but it was nto running at that time because I had the control board burn out.  This necessitated a return trip to Manila and ordering parts from China, which I did.

About 12 days later, I was back on the boat to Cebu, re-installed the electronics and some hardware on the machine.

Then back to Cebu where I sent my helper back to Manila, and I holed up in the hotel for 3 nights, sick with flu.  Took the boat from Cebu to Cagayan De Oro in Mindanao.

Arrival in Cagayan (CDO) I initially planned on staying the night in CDO and taking the bus the next morning, having read how treacherous the road between CDO and Davao was.  However searching online, I was unable to find anything decent.  Departing the boat and leaving the port area, I found myself in turd world hell.  It looked like Africa.  Not like the fairly modern places in the rest of the Philippines.

I found a shuttle van whose driver claimed he was departing to Davao right away.  So I engaged his services.. and he over charged me...

The van was full but 3 passengers were complaining about the price.  they agreed to the price then awhile later demanded a lower price.  So the van went to the bus/van terminal.

I ended up waiting there for 2 hours.

Meanwhile I was treated to the scent of raw sewage, and two street dogs screwing in the passenger waiting area for the bus along with another dog that casually walked in and took a shit in the middle of the waiting area.

The driver was up to that point, one of the most dangerous and reckless drivers I had ever gotten a ride from.  I should have taken the bus.

He raced as fast as he could, and took frequent breaks, which pretty much wasted any time he gained from driving fast.  Total moron.  We had one flat tire 3/4 the way into the trip.

By the time 4am rolled around we was nearing Davao.

The road got much nicer and there was not a squatter shanty in sight.  It looked... almost like Texas...
Finally I was dropped off at the van terminal and with my last 1% of cell phone battery pulled up the map to a hotel recommended by my client and proceeded there.

I checked in and got about 4 hours sleep, before going to the clients place to set up his order.

Got about 1/3 of the job done, but I was so exhausted, and still sick with flu, so I went back to the hotel and to sleep.

Next day had the job mostly done with some testing for the last day of departure.

I had to get some stuff machined in Davao and saw a bit of the city.  It was fairly nice.  Modern except that the electric service was crap.  Lots of new construction.

Davao is the city where the present Philippines president was mayor before the recent election.

There was a terrorist attack in the city a couple days previous so there was heavy police presence. Terrorist attacks were pretty rare in that city, so the reaction was rather extreme.

One thng I noticed about Davao is that the Philippine president professes to dislike the US intensely, yet he emulates the US in Davao every chance he got.  From eyesore abatement teams, traffic cops with radar (only city I ever seen in the Philippines with actual enforcement of traffic laws)

The streets were clean, and at least half the city would not look out of place if you dropped it in the US.

Finally left and got another van to CDO.

This time it was the absolutely worst trip ever.

It was daylight, and I wanted to see the countryside on the tip so I got a seat in the front of the van.

the driver drove so fast the tires squealed in the turns and passed in blind curves.  He even disobeyed flaggers in the many sections of road that were under construction and drove against the oncoming traffic.  I had several near death experiences including missing getting a well drilling pipe thru the windshield by about a foot.

He nearly hit a brand new SUV and the SUV forced the van to a stop where the owner of the SUV exited the vehicle from the back(he had a driver) and chewed the ass of the van driver.  Basically the van driver was told to shape up and dont drive reckless or he was going to get shot and the SUV owner displayed a 45 to the van driver.  Frankly I would have cheered the SUV driver on for shooting the Van driver at that point.

Arriving at the port, I missed my boat that I bought ticket for on the Pope John Paul so I bought a ticket on trans Asia.

It was dark and stormy that night.  The air conditioning accommodation was all sold out leaving only the cheap bunks for the ride back to Cebu.  This meant no air conditioning and the sides of the boat were open.  It rained and the roof leaked in a few places.  The real kicker was that the ticket cost the same on that boat as the space on the other boat with the air conditioning.

The boat got hit by lighting several times on the trip as well.  It was clean, but the amenities were very sparse.  Food consisted of a cup of instant noodles and can of beer.

Got to Cebu, installed a laser, then back on the boat to Manila.  I arrived bout 8pm, so I grabbed a taxi to the train, took the train across town (being the fastest transport) and a taxi to the house.