Can a Pope Be Impeached?

If it were ever appropriate, now is the time. This man is a disgrace.
TES

The man known as the pope and the vicar of Christ – but who in light of what follows is probably best referred to by his real name, Jorge Mario Bergoglio – recently gave an interview demonstrating why “so many people think he is the anti-Christ.”

The more salient features follow in the link above

The USOOV is Releasing Criminals In Your Neighborhood

https://www.youtube.com/watch?v=2QOwAJ2ez6U&app=desktop
(If you want to exercise your “anger muscle,” watch this youtube.)
TES
No comments: Links to this post

Stop Being So Nice The Enemy is Not

I find it interesting that I had one request for the print ready files of the agit-prop I did last year and it was from Sammy K. who was gonna sell it. (interestingly he had a different name on his email than the ones disclosed so far)
However for all the talk about posturing, and sneaking out in the woods, when was the last time you did any real flyer distribution and campaigning?
I can tell you that a few years ago, I did a poster campaign in California.  Right in the heart of their areas.
I had noticed that the garage sale signs were not being removed, so having access to a print shop, I ran off a bunch of full color posters done in ww2 agit-prop style in tabloid size on self adhesive label paper.
Donning a hoodie, and riding a cheap bicycle, over several nights I plastered several areas with posters.
I placed them in such a way as to if someone mapped the posters, they would not be able to get a accurate triangulation of the location I was operating out of.
This was a couple months before the Obama joker signs appeared in the same area.
I did notice that all were removed without trace by the next morning.
I staked one poster out and saw that it was not a gov official removing them, however I did notice a uptick in police patrols.
The point being, that the message was sent and received.
Now imagine that Zero has sent a bunch of Syrian barbarians to a town 50 or 100 miles from you.
How hard is it to print up a bunch of fliers stating that Obama has searched the world to bring Syrian terrorists who were killing our troops in Iraq and dump them in our home towns.
Printing is damn dirt cheap now days.  Check your local Craigslist and get a cheap used photocopy machine with refillable toner cartridges, or a inkjet printer with the continuous ink system.
A ream of fliers will go far.  3 fliers per legal size page,
Keep the message simple and very short.  You only have a fraction of a second to make your point.
Do not ramble, a simple vector graphic and one or 2 sentences.
Get in the libs faces.  Agitate, push back.  Stop being so f--king nice.
Comment reply.
Yes most color printers put a sort of hidden pattern on the paper that can identify the make model and for some higher end color xerox machines serial number for anti money counterfeiting purposes.
However in the grand scheme of things, if you never registered the warranty on a cheap printer, it won't be easily tracable.
There are plenty of other methods to be identified, like carrying your cell phone with you, facial recognition, license plate readers, pattern recognition and basic fingerprints.
Should the libs get in a uproar, like they do when the Klan does their flyering thing, put something like a quote of the first amendment and a statement saying "I don't need no permission for free speech"
How many great memes you see online over the course of a month?  See something good? Save it and print it.
The American revolution was fought with handbills as well as arms.
There are even flyer services that will distribute your message for a price much less than bulk mail.
For the cost of a case of ammo, you can either spend a weekend venting your anger punching holes in targets or rabble rouse and really deflate some self serving political correct assholes ego.
Got a pickup truck?  Make sure your papers are in order (cops WILL harass you) make a frame from 2x4 or steel pipe and put a vinyl tarp banner on it in the style of the mobile billboard.  Drive around the state capital building where the politicians and their staff work.
Make the commies feel like they are on the losing side again.
6 comments: Links to this post

What did socialists use before candles? 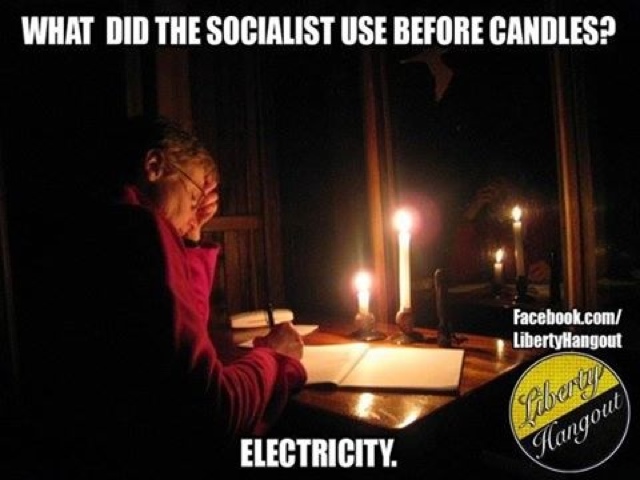