The 3D printer is ready

The last 2 months here have been crazy, hence the dearth of posts.

At last I have a bit of time to update everyone on what is going on.

We are now ready for production of our 3D printer.

I have spent the last couple months working with suppliers, machine shops, distributors, and engineers.

Along the way, it has been a roller coaster of ups and downs.  Several times I thought the project was going to end in failure, when money needed to go to the next step was not available, or suppliers changed their tune.

I did the CAD work for the production machine, then sent to the engineer for putting into solidworks, layout, and simulations.  The engineer did a lot of experimenting with the design, making changes that made the machine more expensive to manufacture and less reliable.  At the time he presented the bill for work, he demanded a ownership share of the business, when the was not forthcoming he billed me a exorbant amount for partially finished work.  The bill was for 96 hours, and he was demanding 10% ownership share for basically 96 hours of work.

Of course we refused and took the bill, not knowing that the drawings incorporated serious design flaws that were revealed during manufacture of the first machine.  Additional funds from said engineer was demanded to fix the problems that he created in the first place.

So we found a new engineer with more experience and who owns a honest to goodness machine shop.  Not the usual barefoot cowboy shop that seems to be the norm in the Philippines (where production is happening) rather a shop using fairly new Bridgeport mill clones with digital readout.  The shop makes parts that go on Airbus planes so they know their stuff.

Consequently the machine took a large leap forward in the mechanical accuracy and reliability.  It also is much quieter than the prototypes.

The last hurdle (aside from funding) is tidying up the wiring.  I need to hire a engineer who specializes in the sort of thing.  It works and looks good now, but ever the perfectionist, I want it to be a thing of beauty, even if I am the only one who sees it.

Right now I could sell many more machines than I have, except that I do not have inventory.

In other news, I have a dedicated re-seller in Germany now.  The Germans flew out to the tropical island here, spent a few days in the shop, drank a lot of beer, and then flew back to Germany, to open up a store front and work on the CE and ROHS certifications for Europe.

As I write this, the first machine is in transit to Germany for that process.

The new printer works really really nice.  Once I got the bed height leveled and software settings dialed in, it was printing like a champ.  I was amazed to find that the fine tuning of the print head design I made increased the reliability of the print head even further.

The biggest headache in 3D printing is the nozzle jamming.  Usually this involves disassembling the thing, clearing the jam with a drill and putting it back together.  Now I just reverse the motor, which pulls the filament back out (and the swollen blob that caused the jam) snip the bad part off with a wire cutter, then press the extrude button and feed it back in.

Right now we are at a 3 week wait for machines.  If someone placed an order today for one of these at $3500USD, it will be in FedEx in 3 weeks.  Shipping to the US is almost $1000 for air freight.

It is a heavy machine. We are close to 80 pounds weight, and we recommend bolting it to a heavy table.

Some of the extra features of this machine are the fact that it uses 16mm guide rods for the Z axis and the smallest guide is 12mm.  It is rock solid.

It has a 500 watt heated bed, and can reach temps above 150c.  The print head is limited to 400c with a PID auto tune built in.  Unlike the other machines on the market, this one does not need a lot of messing around to get the temperatures set right and stable. It will maintain stable temperatures of one degree.

I can go higher temperatures should one want that for a little more cash on a different controller and different heater.

It has a single print head.  We have experimented with dual, but they are a real pain in the rear to get adjusted.  We have been hearing news in the industry also that manufacturers are cutting back to single extruders because of customer service issues, and the fact that few people actually use this feature.

The real gain with the single print head, however is speed.  Less weight=less inertia to move around at high speed.

This 3D printer is perfect for making custom car parts, and signs.  With its huge build area 14x16x12 inches and high speed printing, it can make a lot of stuff without the need to constantly baby sit the machine.

If you want one, go to the company website www.autox3d.com 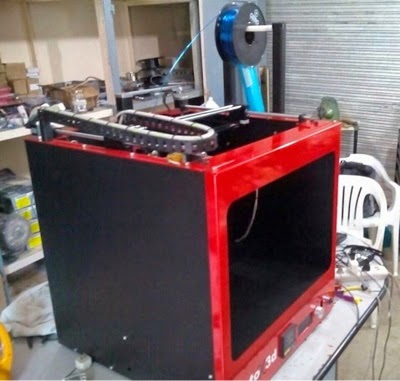 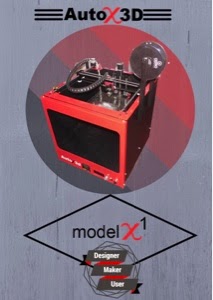