This what happens when you have incompetent in charge.

This is heading your way too in the USA, if they go on full lockdown without a plan.

You can not print food.

Here, Manila is also geographically unique.  There is 30 million people in a 60x60 mile box.

The most densest urban area in the world.

Some claim Toyko or Paris, but 10 of the top dense urban areas are for all intents and purposes in the Manila metro area.

Food before this was quite cheap and easy to get.

But they killed the entire logistic system.  Very very little traffic out there + no work = no money to buy the remaining food.

Food is coming in from the outlying areas, but there is a calorie deficit growing and the supplies of processed foods is going fast.

Only YESTERDAY April 3 was the university able to deliver local made test kits.

I personally prepared, if you have been following my blog from the beginning on this.  (daily posts started Jan 30)  I am in the EXTREME minority.  I do know others here who prepared like I did and even more than I did.

I an my family will ride this out.  Because we are the ants, not the grasshopper.

The bigger issue is that people will starve here.  They will not sit quietly by.  They will go out with one big gasp of violence.


It did not have to be this way.  They could have stopped all the travelers from Wuhan and the other Chinese cities.  The Chinese gov threatened the Philippines gov if they did that, and the Filipinos obeyed. 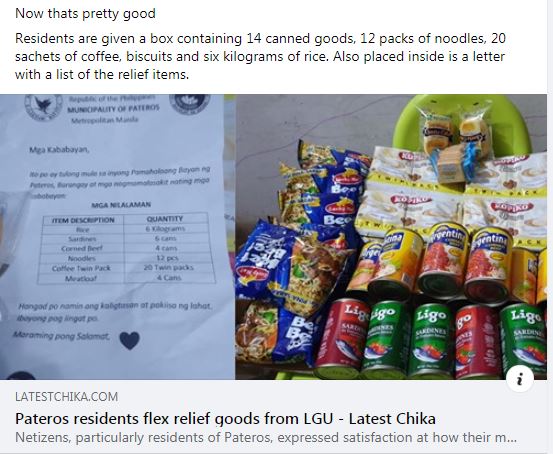 These distributions of food are uneven across the city.

In Pateros this was give out.    But again, how long can this last?


I am a mere former scumbag truck driver, and if I can figure it out, surely the big brainiacs in charge should be able to.

Hearing firsthand accounts that relief goods distributed by families putting chairs for each household member outside the door, one chair per person.  Many are putting out a excess of chairs.  household of 3 put out 6 chairs on example.

This morning now Duterte admin centralizes distribution of relief goods under one agency... Yet that agency has not distributed anything yet. 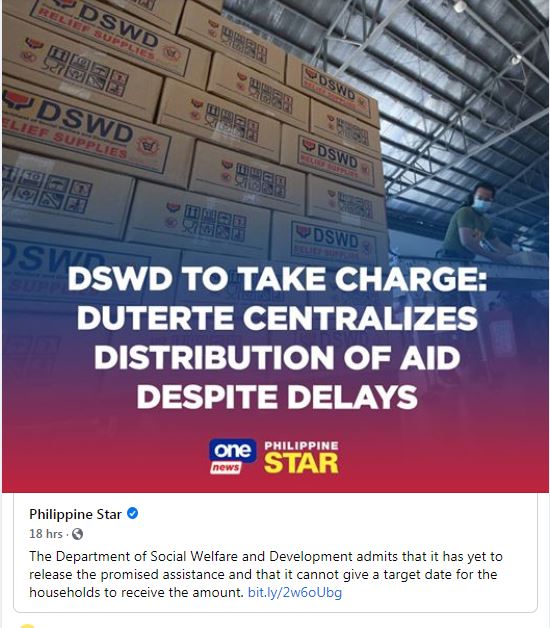 He publicly fired the anti-corruption head for accusing the vice president of conspiring against the administration for giving aid and programs to assist from her budget.

The Philippines is very similar system to the US, except the VP and President are separate tickets.

At the moment, the VP is from the previous admin party.  Duterte is a coalition backed by the Marcos clan.

This would be the equivalent of having Pelosi as president and Trump as VP and Pelosi spends a lot of time undermining the VP.

So it came as a surprise that Duterte would stop this particular nonsense as normally there is not a unfounded accusation he will not jump on  and ride like a horse.

A Human rights activist, criticized Duterte and in return Duterte said this publicly in his speech on TV.


The speech is below.  he looks confused.  On drugs or not all there.  Loses his train of thought constantly.  Look at his eyes.

Also his previous speech he ordered police and military to shoot to kill any trouble makers.

This speech he denied saying it.  He quotes himself, then says, Oh I did not say that.
1 comment: Links to this post 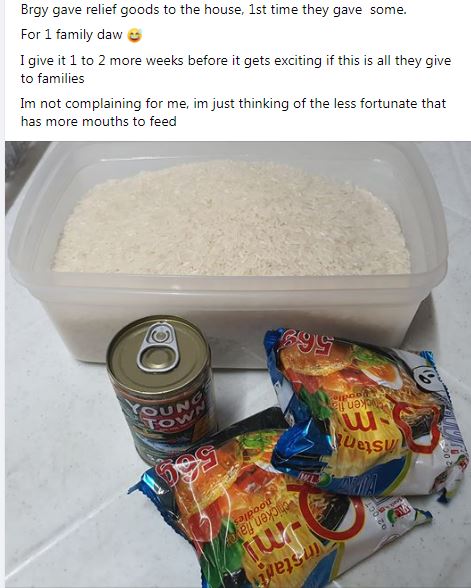 Now let u break down this for a family of 4:

Food is running out.  Hearing reports of markets and stores empty.  This is the 'free' food they are providing to people.

This will not end well.

The quarantine was mismanaged from the start.

Meanwhile in other areas, families were instructed to put a chair outside their door for each person in the house.  Heard several first hand accounts of household of 3 putting 6 chairs outside, some putting 10.


Thought you was smarter than this in America.

On Feb 27 y'all was claiming that you had bad info?  Wuhan Flu was not as bad as you thought?

Here is what I DO know.

MSM oligarchs kept this out of the news in the USA so they could sell their stocks because they already KNEW this was coming.

Squandered 30 days to prepare because you had to get your cash out of the markets and leave us holding the bag.

You was caught unawares when you had a consulate in WUHAN!!!

You withdrew your embassy personnel on Jan 25 from Wuhan!! 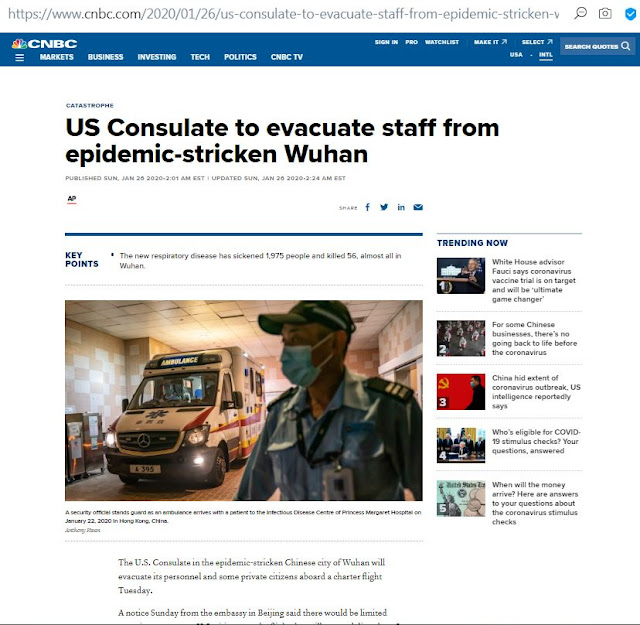 Now we have this in Ecuador:

If this is not waking you the hell up, nothing will.

Meanwhile a Youtube guy I been watching for bout a year and half put together a compelling case to the origin of the Wuhan Flu, from the Chinese own words.

Food production in the Philippines has nearly stopped.  Fishermen are not allowed to fish.  Stores not allowed to open.  Farming equipment and hardware not available.  If it breaks, that is it.  Fuel deliveries curtailed.

Every shithead with a tiny village is cutting the national highway that pass thru their town.  So of course no food reaching Manila.  Food rotting in the fields.

By next week, the canneries will be out of stock.

Vietnam has suspended all rice sales to the Philippines.

The Philippines only in the last 2 years under Duterte allowed major rice imports.  Consequence they destroyed their own rice industry as the Vietnamese rice industry is more efficient that the Filipino one.  Simply because the Vietnamese can get one additional rice crop in per year.

A few months ago local rice was sold at the field for a pittance.  Less than the cost of production. (in a country where you can hire a farm worker for 7 bucks a day)  So many did not re-plant.  So, of course, limited rice production.

This entire lockdown here, has no solution, no way to lift the quarantine.  They are simply going to make people starve and die at home instead of dying in the streets like Ecuador.

They have 87 thousand test kits.  for the entire damn country.  Track and trace is not happening, but they are busily going after anyone saying bad things about duterte on facebook.

Meanwhile Duterte is literally senile, with his 2 kids, and a couple corrupt senators in charge.

China (assuming China has managed to get control of this and is not incapacitated themselves) will be able to walk in and take any country they want.

89 thousand tests available for a country of 110 million.

Lockdowns are supposed to be combined with testing and masks, plus a plan to release the quarantine.

The politicians are catching this left and right.

This will not end soon.

We conducted a re-inventory in the house last night.  We can make it till December... Barely but it will not be very tasty food without the garden.

Good thing I bought a bunch of packs of mixed herbs.

6 am here, the only sound is chickens everywhere.  Roosters.

Have not heard a airplane in weeks.

Still seeing people driving  around the neighborhood.  But I would say a fraction of before.  Either running out of gas or just staying home.  I put sheet metal and self taping screws over top of my gas cap to make it harder to steal.

Prob will start both cars today and run them for a bit just to make sure they will start if we have to evacuate.

I set up the garden hose as our own personal fire fighting system.  Just in case.

We are adrift in our little lifeboat/fort.  We can still get supplies, but each trip out is becoming more risky as cases/crime grows.

By: Karl R. Ocampo - @inquirerdotnet
Philippine Daily Inquirer / 04:11 AM March 30, 2020
The continuous gridlock on checkpoints and the inconsistent directives from local government units (LGUs) on the movement of agricultural workers and supplies have put a major dent on the poultry industry, causing some poultry raisers to abandon their livelihood as prices plummeted.
In an interview, United Broilers Raisers Association president Bong Inciong said the farm-gate price for chicken had now declined to between P30 and P50 a kilo, way below the P70 a kilo in production cost, forcing many raisers all over the country to stop operations.
The drop was mainly due to disruptions on input and output deliveries, as some LGUs continued to be dismissive of national directives. The provincial government of Laguna, for instance, has mandated a total lockdown, which would prohibit the entry and exit of all people, even those carrying commodities.
The country’s poultry production is mainly concentrated in Central Luzon and Calabarzon, where almost half of the country’s output comes from.
There were also reports of road closures in the provinces by overly cautious residents, who dumped heaps of soil over pathways to prohibit the entry and exit of residents and outsiders.
Most egg harvesters were also not allowed to go to work since harvesting must be done at night to avoid egg shrinkage and mortality. To do this, workers must be allowed to go out beyond curfew schedules.
“The DA (Department of Agriculture), DILG (Department of the Interior and Local Government), and the DTI (Department of Trade and Industry) have been very active with our concerns, but the problem is with the LGUs that are, in effect, very dismissive of national directives in the mistaken belief that if they do it on their own, they would be alright. But this is a mistake,” Inciong said.
In a letter addressed to Agriculture Secretary William Dar, Inciong detailed the hardships that poultry raisers were currently facing amid the enhanced community quarantine.
“Aside from the collapse of farm-gate prices, the behavior of LGUs has brought despair to our members that I have not experienced before. Most are cutting back on production. Some will just finish their current production cycles and stop their operations. We need to support those who plan to continue and discourage those who want to quit,” he said.
“It is critical to note that the production cycle of broilers is only about 30 to 35 days. If things do not normalize soon, then 30 days from now, we will start to feel its impact on food supply … The domino effect would be devastating,” he added.
He has called on the national government to review the local government code during times of crisis. INQ 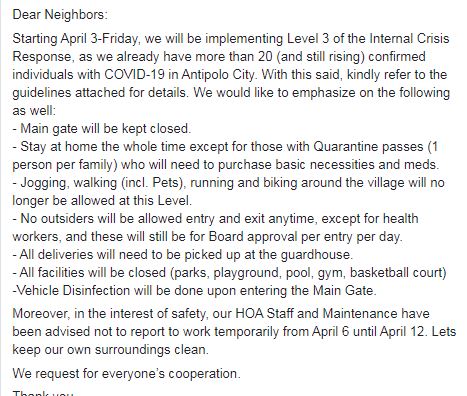 In the Philippines this is happening. 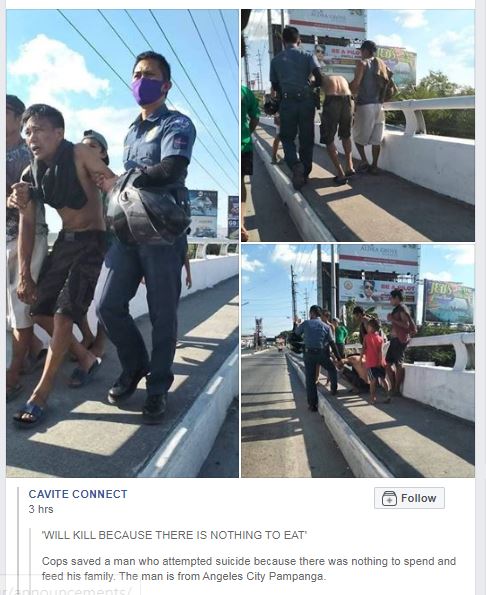 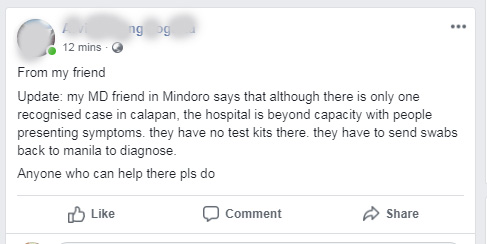 Local sentiments.  Not  my opinion.  Just what is going around here. 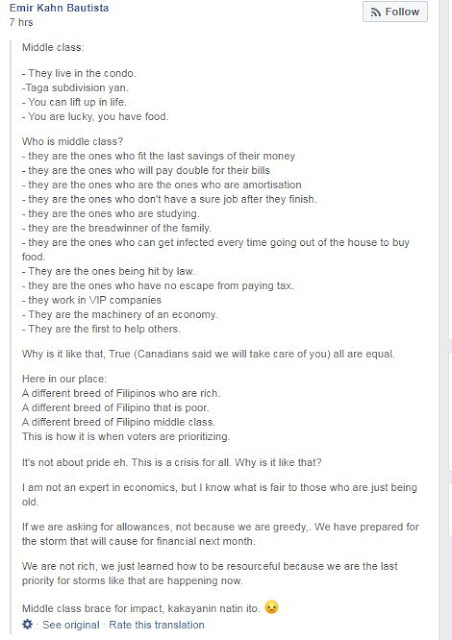 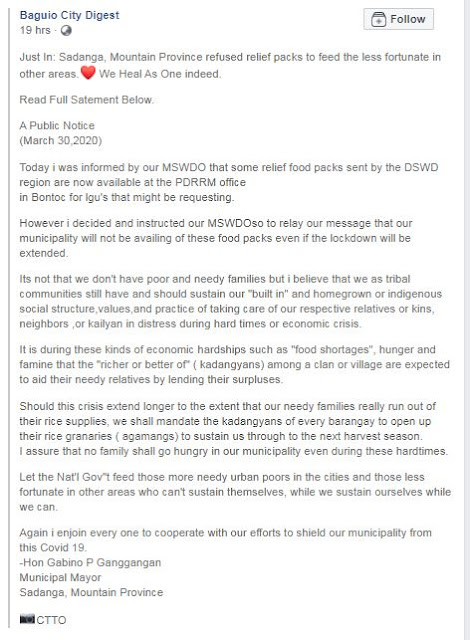 Do not think that your white bread America is immune.
Italy today also.  It just took them longer to get here. 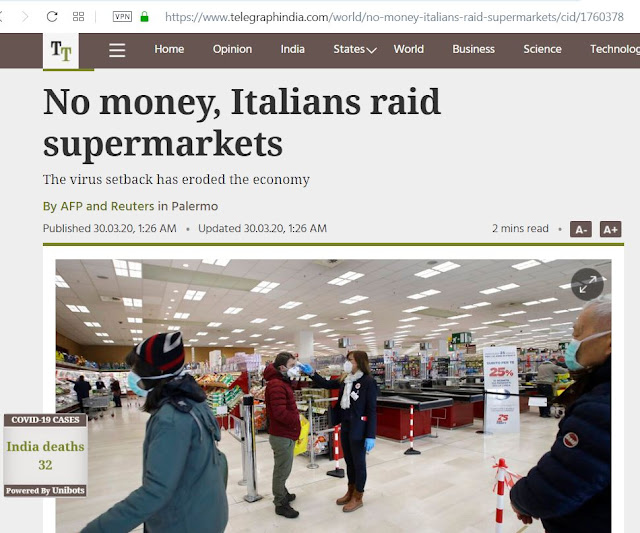 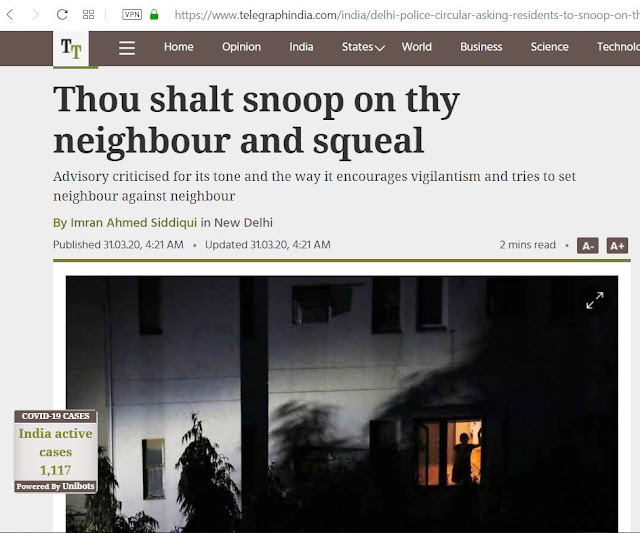 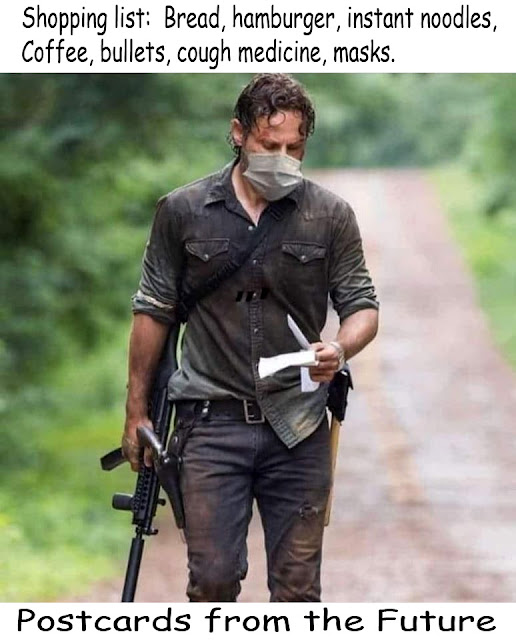